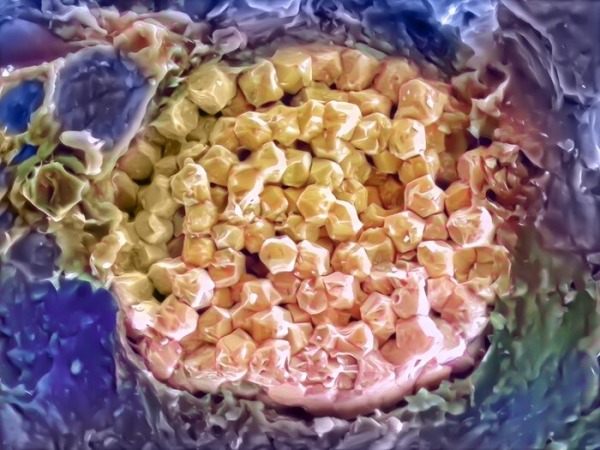 Trapped for millennia, the tiniest liquid remnants of an ancient inland sea have now been revealed.

Trapped for millennia, the tiniest liquid remnants of an ancient inland sea have now been revealed. The surprising discovery of seawater sealed in what is now North America for 390 million years opens up a new avenue for understanding how oceans change and adapt with the changing climate. The method may also be useful in understanding how hydrogen can be safely stored underground and transported for use as a carbon-free fuel source.

“We discovered we can actually dig out information from these mineral features that could help inform geologic studies, such as the seawater chemistry from ancient times,” said Sandra Taylor, first author of the study and a scientist at the Department of Energy’s Pacific Northwest National Laboratory.

Taylor worked with PNNL colleagues Daniel Perea, John Cliff, and Libor Kovarik to perform the analyses in collaboration with geochemists Daniel Gregory of the University of Toronto and Timothy Lyons of the University of California, Riverside. The research team reported their discovery in the December 2022 issue of Earth and Planetary Science Letters.