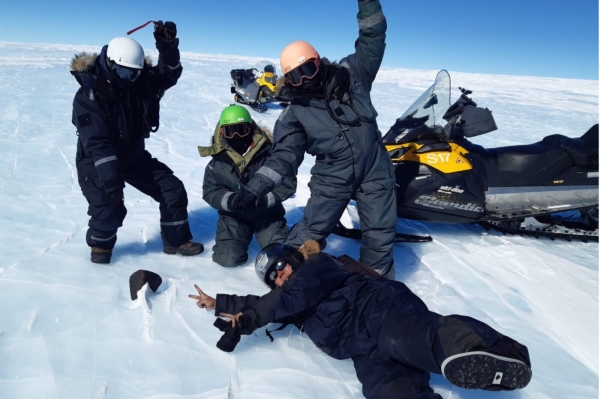 Antarctica is a tough place to work, for obvious reasons— it’s bitterly cold, remote, and wild.

Antarctica is a tough place to work, for obvious reasons— it’s bitterly cold, remote, and wild. However, it’s one of the best places in the world to hunt for meteorites. That’s partly because Antarctica is a desert, and its dry climate limits the degree of weathering the meteorites experience. On top of the dry conditions, the landscape is ideal for meteorite hunting: the black space rocks stand out clearly against snowy fields. Even when meteorites sink into the ice, the glaciers’ churning motion against the rock below helps re-expose the meteorites near the surface of the continent’s blue ice fields.

An international team of researchers who just got back from Antarctica can attest to the continent’s meteorite-hunter-friendliness: they returned with five new meteorites, including one that weighs 16.7 pounds (7.6 kg).

Maria Valdes, a research scientist at the Field Museum and the University of Chicago, estimates that of the roughly 45,000 meteorites retrieved from Antarctica over the past century, only about a hundred or so are this size or larger. “Size doesn’t necessarily matter when it comes to meteorites, and even tiny micrometeorites can be incredibly scientifically valuable,” says Valdes, “but of course, finding a big meteorite like this one is rare, and really exciting.”

Image: Red sea urchins are an important commercial fishery species along the California coast. Emily Donham and other UCSC researchers studied how different populations of red sea urchins respond to changes in their environments. (Photo by Kate Vylet)