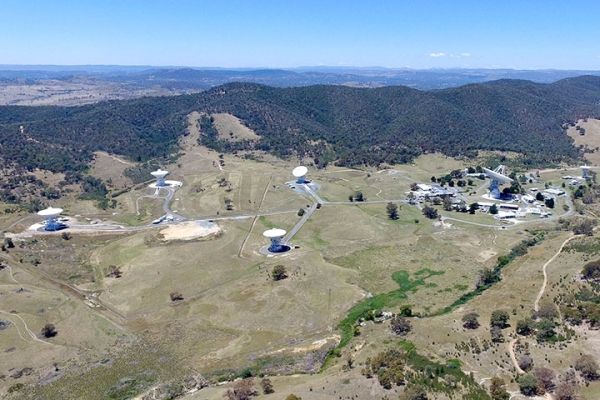 When NASA engineers need to communicate with distant spacecraft, the signal goes out through one of three NASA communication complexes spread around the world. Without the Deep Space Network (DSN), it would not be possible to stay in touch with missions such as Voyager 1—which launched in 1977 and is still sending back signals from interstellar space, some 22 billion kilometers (14 billion miles) away—or the Deep Space Climate Observatory (DSCOVR)—a satellite that takes full-disc images of Earth from 1.6 million kilometers (1 million miles) away.

On February 24, 2020, the Operational Land Imager (OLI) on Landsat 8 acquired a natural-color image (above) of the communications site in Canberra, Australia.

Each of the three DSN complexes has large antennas that are designed to enable daily radio communication between NASA spacecraft and engineers on Earth. Canberra, like the other two facilities, has at least four antennas, each with large, parabolic dishes and sensitive receiving stations. In the Landsat image at the top of the page, the dishes appear as white circles.