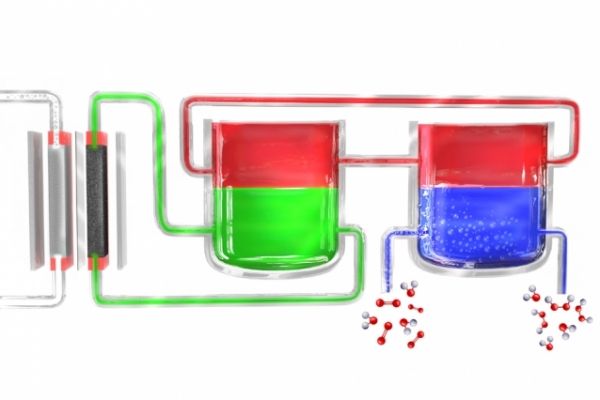 Hydrogen peroxide, a useful all-purpose disinfectant, is found in most medicine cabinets in the developed world.

Hydrogen peroxide, a useful all-purpose disinfectant, is found in most medicine cabinets in the developed world. But in remote villages in developing countries, where it could play an important role in health and sanitation, it can be hard to come by.

Now, a process developed at MIT could lead to a simple, inexpensive, portable device that could produce hydrogen peroxide continuously from just air, water, and electricity, providing a way to sterilize wounds, food-preparation surfaces, and even water supplies.

The new method is described this week in the journal Joule in a paper by MIT students Alexander Murray, Sahag Voskian, and Marcel Schreier and MIT professors T. Alan Hatton and Yogesh Surendranath.

Even at low concentrations, hydrogen peroxide is an effective antibacterial agent, and after carrying out its sterilizing function it breaks down into plain water, in contrast to other agents such as chlorine that can leave unwanted byproducts from its production and use.

Image: In a new method to produce hydrogen peroxide portably, an electrolyzer (left) splits water into hydrogen and oxygen. The hydrogen atoms initially form in an electrolyte material (green), which transfers them to a mediator material (red), which then carries them to a separate unit where the mediator comes in contact with oxygen-rich water (blue), where the hydrogen combines with it to form hydrogen peroxide. The mediator then returns to begin the cycle again.  Image courtesy of the researchers.