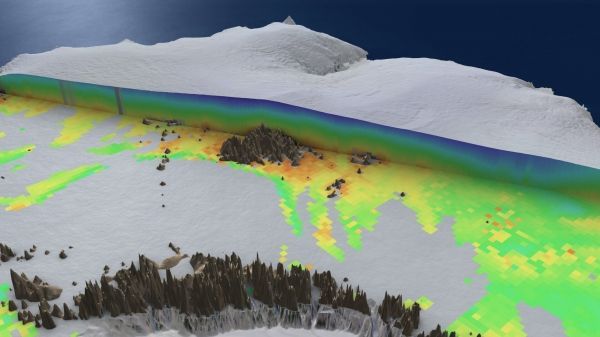 As ESA’s SMOS satellite celebrates 10 years in orbit, yet another result has been added to its list of successes. This remarkable satellite mission has shown that it can be used to measure how the temperature of the Antarctic ice sheet changes with depth – and it’s much warmer deep down.

The Antarctic ice sheet is, on average, about 2 km thick, but in some places the bedrock is almost 5 km below the surface of this huge polar ice cap. Most of us would probably think that the temperature of ice, no matter how thick, remains pretty much the same throughout: basically very cold.

However, although the surface of the ice sheet is cold, the temperature increases with depth primarily because of the basal geothermal heating from beneath Earth’s crust. In places, it is warm enough to melt the ice, which accounts for the presence of lakes and a vast hydrological network at the bedrock.

Nevertheless, there is little accurate information on exactly how temperature varies with depth other than from ice core borehole locations. Since the massive white ice sheets that blanket Antarctica and Greenland reflect incident solar radiation back out into space, they are extremely important regulators in the climate system and, therefore, play a key role in the health of our planet.