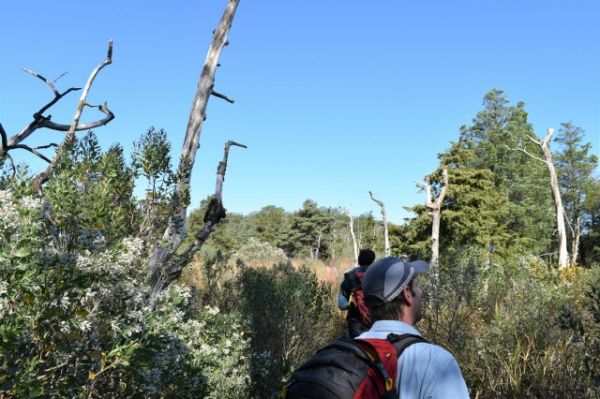 Many East Coast woodlands along the East Coast are gradually turning to ghost forests, as saltwater rises up to 5 millimeters a year in some places, killing tree roots.

Bounding the southern approach to New York harbor, New Jersey’s low, narrow Sandy Hook peninsula is home to an extremely rare forest: a 65-acre patch of eastern holly and red cedar trees, some of which date to the early 1800s. Close to sea level, rooted in nutrient-poor sand and exposed to wind from all directions, such forests once covered much of the East Coast. These few trees have survived the development that has swallowed nearly everything around them, along with countless storms, and — so far — rising sea levels. In 2012, Hurricane Sandy tore through, killing many trees with saltwater inundation and wind. The skeletons of the dead now whiten in the sun. With the slow inland march of rising ocean waters, and the increasing climate-driven potential for future powerful storms like Sandy, how much longer the rest may exist is an open question.

Tree-ring scientist Nicole Davi and several colleagues visited the forest one recent fall day. Davi, a professor at William Paterson University and researcher at Columbia University’s Lamont-Doherty Earth Observatory, is interested in the relatively new field of paleotempestology — the study of past storms. In particular, she wants to know if she can use the old trees to establish the frequency and power of coastal storms preceding the roughly 100 years of modern meteorological records. Such knowledge would be valuable not only in understanding past events, but could help scientists project how this and other coastal ecosystems will respond to the stressors projected for coming decades.