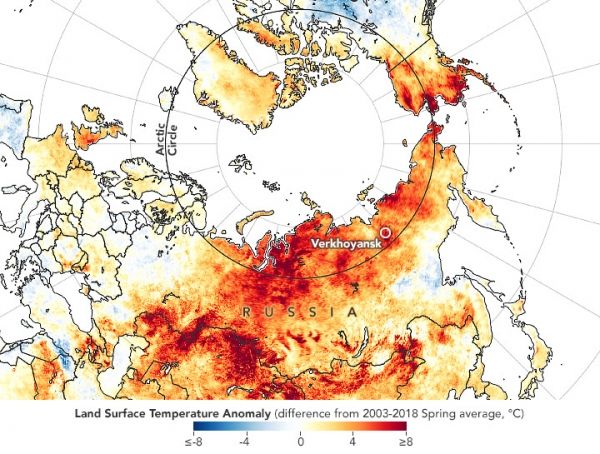 Fires are raging in eastern Siberia in the midst of an unusually long-lived heat wave.

Eastern Siberia is famous for some of the coldest wintertime temperatures in the Northern Hemisphere. But in 2020, it has been the region’s wildly high temperatures and wildfires that have wowed meteorologists.

After several months of warm weather, the Russian town of Verkhoyansk reported a daytime temperature of 38°C (100.4°F) on June 20—likely a record high for the town. (The previous high was 37.3°C, recorded on July 25, 1988.) If verified, this will be the northernmost temperature reading above 100°F ever observed and the highest temperature on record in the Arctic, according to the Capital Weather Gang.

“This event seems very anomalous in the last hundred years or so,” said NASA Goddard Institute for Space Studies Director Gavin Schmidt. “The background trends in temperature in this region are about 3 degrees Celsius since the 19th century, so the probabilities of breaking records there are increasing fast.”