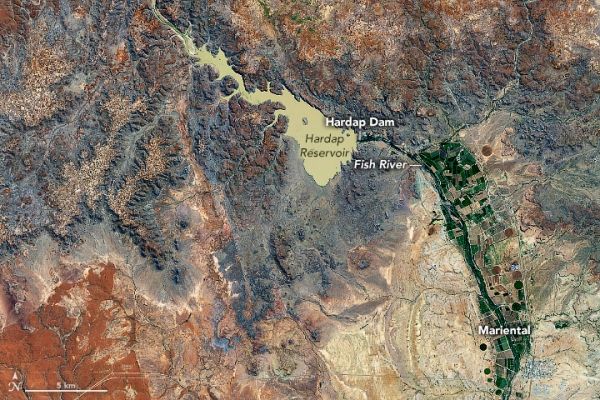 The town of Mariental sits at the convergence of the Kalahari Desert and the Central Plateau.

The image above shows the convergence of two contrasting geologic regions near the town of Mariental in south-central Namibia. The semi-arid sandy savannah of the Kalahari Desert lies to the east of the town, while the rocky plains of the Central Plataeu are located to the west. The image was acquired on May 9, 2020, by the Operational Land Imager (OLI) on Landsat 8.

The Kalahari Desert and Central Plateau are two of the main topographic regions across the country. The Kalahari Desert is a large plain that covers the eastern third of Namibia as well as northern parts of South Africa and nearly all of Botswana. The area is covered by sand that generally appears red due to a thin coating of iron oxide.