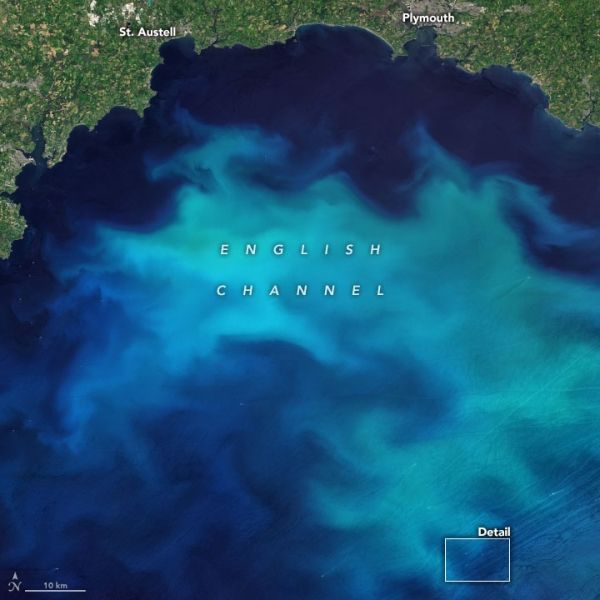 Unusually clear skies and persistent, unseasonable heat may have set the stage for a large and persistent blooms of phytoplankton in the waters around England.

Spring and early summer 2020 brought unusually clear skies and persistent, unseasonable heat to northwestern Europe. Those conditions likely set the stage for large and persistent blooms of phytoplankton in the waters around the United Kingdom and Ireland.

Phytoplankton are tiny, plant-like organisms that often float near the ocean surface and turn sunlight and carbon dioxide into sugars and oxygen. In turn, they become food for the grazing zooplankton, shellfish, and finfish of the sea. The also play an important but not fully understood role in the global carbon cycle, taking carbon dioxide out of the atmosphere and sinking it to the bottom of the ocean.

On June 23, 2020, the Operational Land Imager (OLI) on Landsat 8 acquired natural-color imagery (above) of a massive phytoplankton bloom off the coast of southwestern England. The next day, the Moderate Resolution Imaging Spectroradiometer (MODIS) instrument on NASA’s Terra satellite observed the same bloom in a wider context (below), and phytoplankton are also visible in the North Sea.