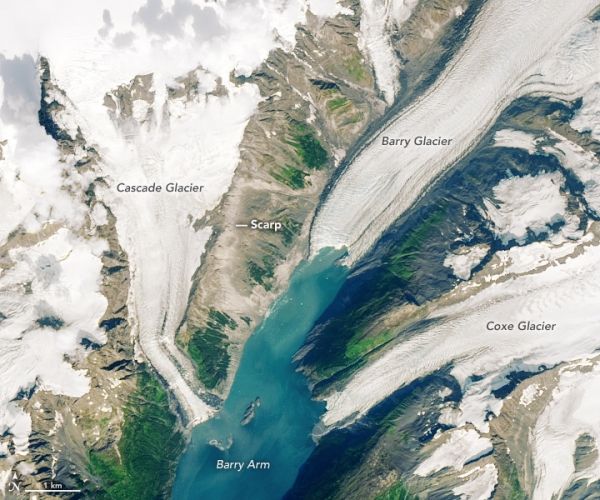 The unstable terrain that poses a landslide threat lies between the Cascade Glacier and Barry Arm Glacier, which has been steadily retreating over the last decade.

Using NASA satellite imagery and software processing approaches, a group of geoscientists has discovered a landslide-generated tsunami threat in Barry Arm, Alaska, that will likely affect tourists and locals in the surrounding area in the next 20 years.

The Barry Arm Glacier has diminished rapidly in the last decade due to climate change, causing the surrounding terrain to become unstable. The researchers found that the mountainside near the Barry Arm Glacier has moved 394 feet (120 meters) over the seven-year period between 2010 to 2017. If that slow-moving landmass were to catastrophically fail – becoming what we typically think of as a landslide – it would fall 3,000 feet into the fjord below, sending tsunami waves toward nearby communities.

The researchers jumped into action after the discovery, writing an open letter to community stakeholders. The findings were published Oct. 29 in Geophysical Research Letters.