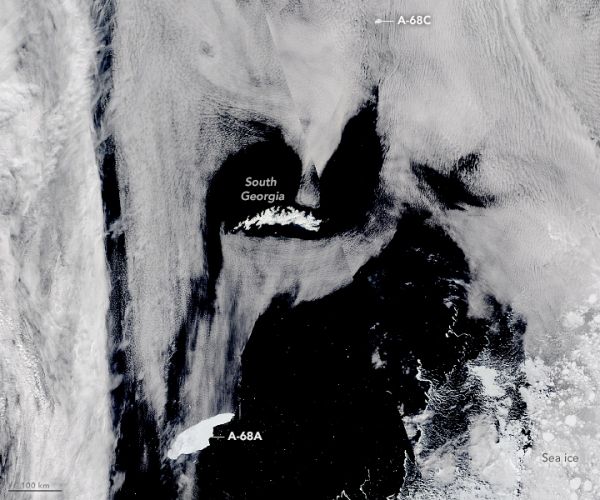 Iceberg A-68A made headlines in July 2017 when the Delaware-sized block of ice broke from the Larsen C Ice Shelf on the Antarctic Peninsula. The berg has regained the spotlight in austral spring 2020, as it is now drifting toward South Georgia, a remote island in the southern Atlantic Ocean.

The iceberg and island are both visible in this image, acquired on November 5, 2020, with the Moderate Resolution Imaging Spectroradiometer (MODIS) on NASA’s Terra satellite. The berg now measures (151 kilometers) 94 miles long and 48 kilometers (30 miles) wide—comparable to the island’s length and width of 167 and 37 kilometers (104 and 23 miles), respectively. It is less than 500 kilometers (300 miles) from the island’s southwest shore.

In just over three years at sea, Iceberg A-68A has moved generally northward, passing the tip of the Antarctic Peninsula and floating into “Iceberg Alley.” According to David Long, a remote sensing and polar ice scientist at Brigham Young University, more than 90 percent of all Antarctic icebergs are swept along this path from the Weddell Sea toward the South Atlantic Ocean.