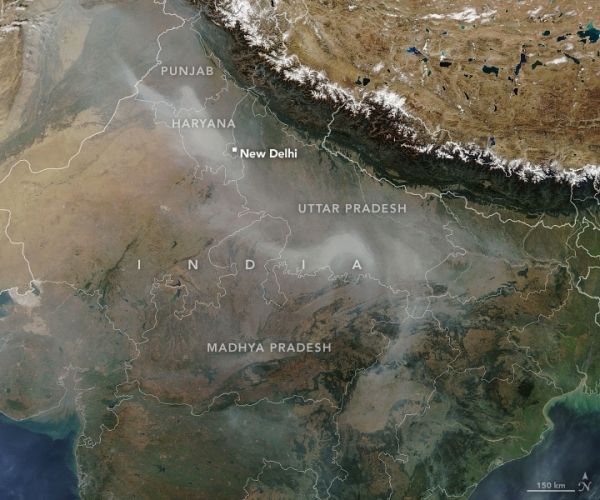 Burning leftover straw after the rice harvest has once again blanketed the region with smoke.

A thick blanket of smoke has darkened skies again over northern India. Every year, farmers light large numbers of small fires between September and December—after the monsoon season—to burn off rice stalks and straw leftover after harvest, a practice known as stubble or paddy burning.

Satellite data indicates that paddy fires were quite numerous this year, particularly in the state of Punjab. The Visible Infrared Imaging Radiometer Suite (VIIRS) sensor on the Suomi NPP satellite made nearly 87,000 active fire detections through mid-November across four rice-growing states in the region—Punjab, Haryana, Madhya Pradesh, and Uttar Pradesh. That is the second most the sensor has observed for the post-monsoon period since VIIRS first collected data in 2012. About 80 percent of the fires in 2020 occurred in Punjab.