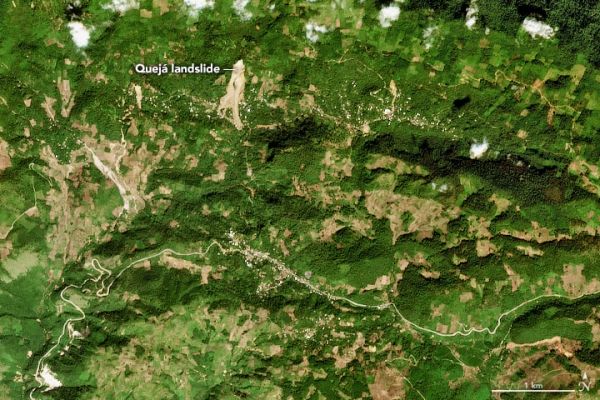 On November 3, 2020, Hurricane Eta made landfall as one of the most powerful hurricanes to hit Central America in years. The category 4 storm destroyed hundreds of homes, killed more than 100 people, and brought torrential rains that triggered large and numerous landslides in Guatemala and Honduras. Less than two weeks later, Hurricane Iota—an even more powerful category 4 storm—nearly retraced Eta’s path.

Within hours of Eta’s landfall and flooding rains, researchers at NASA’s Goddard Space Flight Center worked to predict landslides and map the storm’s aftermath. One team assessed potential landslide hazards using a computer model. Another team analyzed satellite data to map the resulting landslides, some of which were successfully predicted by the model. The NASA Earth Science Disasters program shared the information with national and international emergency response agencies to provide better insight of the hazards to personnel on the ground. The teams are currently running those landslide analyses again for areas hit by Hurricane Iota.

The deadliest of the landslides after Eta occurred in San Cristobal Verapaz, Guatemala, on November 5. Extreme rainfall triggered a massive landslide that may have entombed more than 100 people and buried much of the small farming village of Quejá.