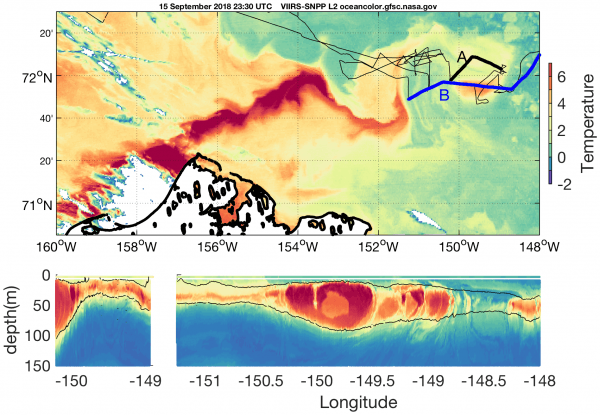 A new study provides the first high-resolution observations of warm, northbound water sliding beneath the surface of the cold Beaufort Sea.

A new study provides the first high-resolution observations of warm, northbound water sliding beneath the surface of the cold Beaufort Sea.

The research, published in Nature Communications, adds to evidence that polar ice may be melting faster than models predict.

“The rate of accelerating sea ice melt in the Arctic has been hard to predict accurately, in part because of all of the complex local feedbacks between ice, ocean and atmosphere; this work showcases the large role in warming that ocean water plays as part of those feedbacks,” said Jennifer MacKinnon, a physical oceanographer at the University of California San Diego’s Scripps Institute of Oceanography and lead author of the paper.

Scientists from the University of Alaska Fairbanks and other institutions used the research vessel Sikuliaq, satellite imagery and an arsenal of scientific equipment to measure smaller-scale physical processes not represented by regional and global ice and climate forecasts.

Satellite imagery (upper figure) shows a warm jet of salty water flowing past Point Barrow then disappearing. Ship-based measurements (lower figures) show that the warm water subducts and continues below the surface. Lines A and B in the upper figure correlate with the ship-based data in the lower left and right figures, respectively. (Photo Credit: Harper Simmons)