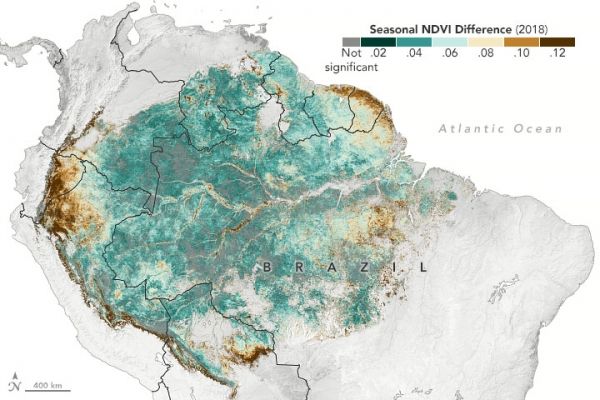 An analysis of geostationary satellite data found a 10 to 15 percent increase in greening around the rainforest during the dry season.

In temperate deciduous forests, seasonal changes are hard to miss. Green forests turn red, yellow, or orange in autumn and brown by winter.

The Amazon rainforest experiences seasons as well, but the changes are far more subtle. Temperatures and sunlight remain pretty consistent year-round, but rainfall varies cyclically, becoming more common in certain months and less common in others. Though there are regional variations, June through September are generally the driest months, and December through March are the wettest. While it still rains a significant amount all year, precipitation often drops by half from the wettest months to the driest.

In recent decades, scientists have been using satellite data to study whether these seasonal variations have a significant effect on the “greenness” of the rainforest canopy. While there have been some conflicting results over the years, multiple studies have suggested that a key measure of vegetation called the Normalized Difference Vegetation Index (NDVI) can detect subtle seasonal cycles.