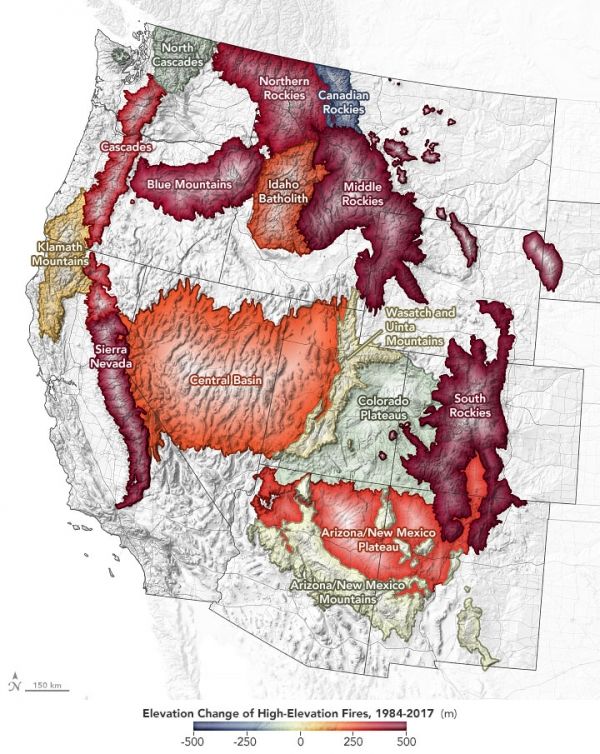 Wildfires in the western United States have been spreading to higher elevations due to warmer and drier conditions.

Scientists have known for decades that climate change makes wildfires more common, larger, and more intense. Now an international team of scientists has demonstrated a new connection between fires and global warming. Using data from Landsat satellites, they discovered that wildfires in the western United States have been spreading to higher elevations due to warmer and drier conditions that are clearly linked to climate change.

Historically, forest fires have been rare in high-elevation areas—at least 8,200 feet (2,500 meters) above sea level. But when McGill University scientist Mohammad Reza Alizadeh and colleagues studied fires that occurred in the West between 1984 and 2017, they found blazes moving to higher ground at a rate of 25 feet (7.6 meters) per year.

Fires are now burning higher up on hillsides and mountainsides because areas that used to be too wet to burn are now drier due to warmer temperatures and earlier snowmelt. The study also showed that drier air—which makes vegetation dry out and burn more easily—is moving upward at a rate of about 29 feet (8.9 meters) each year. The researchers estimated that an additional 31,500 square miles (81,500 square kilometers) of the mountainous U.S. West are now more vulnerable to fires compared to 1984.