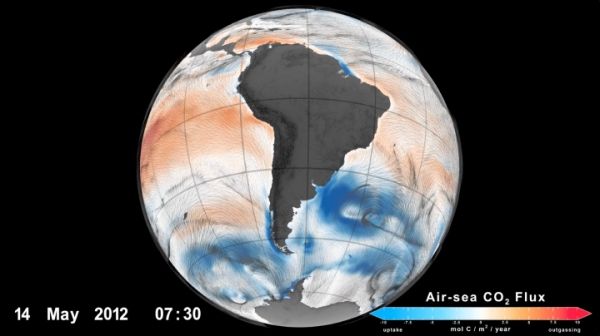 The waters circling Antarctica absorb more carbon from the atmosphere than they release, serving as a strong carbon sink and an important buffer for greenhouse gas emissions.

New observations from research aircraft indicate that the Southern Ocean absorbs more carbon from the atmosphere than it releases, confirming that it is a strong carbon sink and an important buffer for the effects of human-caused greenhouse gas emissions. Previous research and modeling had left researchers uncertain about how much atmospheric carbon dioxide (CO2) gets absorbed by the chilly waters circling the Antarctic continent.

In a NASA-supported study published in Science in December 2021, scientists used aircraft observations of atmospheric carbon dioxide to “show that the annual net flux of carbon into the ocean south of 45°S is large, with stronger summertime uptake and less wintertime outgassing than other recent observations have indicated.” They found that the waters in the region absorbed roughly 0.53 more petagrams (530 million metric tons) of carbon than they released each year.

“Airborne measurements show a drawdown of carbon dioxide in the lower atmosphere over the Southern Ocean surface in summer, indicating carbon uptake by the ocean,” explained Matthew Long, lead author of the study and a scientist at the National Center for Atmospheric Research (NCAR). Aircraft observations were collected from 2009 to 2018 during three field experiments, including NASA’s Atmospheric Tomography Mission (ATom) in 2016.