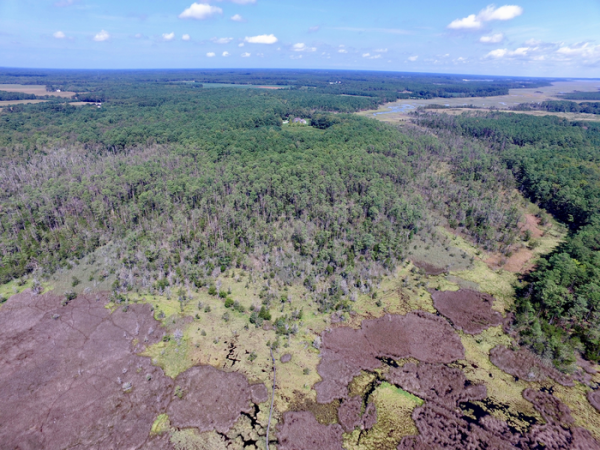 It’s hotly debated whether coastal wetlands can survive sea-level rise by migrating inland. A new analysis using highly detailed elevation maps of the Chesapeake Bay region shows that—contrary to previous studies—human barriers will do little to slow this marsh migration. Instead, extensive areas of low-lying rural land will allow coastal marshes to persist and perhaps even expand as salty water creeps upward into what are now forests and farmland.

Lead author Grace Molino, a Ph.D. student at William & Mary’s Virginia Institute of Marine Science, says “The numbers are striking. Baywide, we expect more than 600 square miles of inundated land in the Chesapeake region by 2100.” That is four times the area that has converted to marshland in the Bay region since historical observations began in the 1840s, and more than 75% will be rural—mainly forests, forested wetlands, and farm fields.

Joining Molino on the study, which appears in the latest issue of Limnology and Oceanography Letters, are VIMS professor Dr. Matt Kirwan along with U.S. Geological Survey researchers Dr. Joel Carr of the Eastern Ecological Science Center and Dr. Neil Ganju of the Woods Hole Science Center. The study was made possible with funding from the USGS and collaboration between VIMS and the two USGS Science Centers.