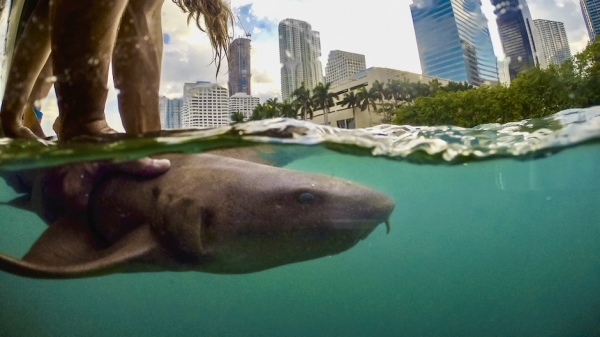 The world’s coastlines are rapidly urbanizing, but how this increased human presence may impact species living in the ocean is not fully understood. In a new study led by scientists at the University of Miami (UM) Rosenstiel School of Marine and Atmospheric Science, researchers tracked the movements of three shark species, bull, nurse and great hammerhead, in relation to the city of Miami. Given the chemical, light, and noise pollution emanating from the coastal metropolis, researchers expected sharks to avoid areas close to the city, but that’s not what they found.

Some animals, like pigeons and racoons, thrive in cities. These species, known as “urban exploiters,” often become dependent on human garbage for food. Other animals, known as “urban adapters,” may show some use of urbanized areas, but still largely rely on natural areas. On the other hand, some species such as land predators such as wolves are very sensitive to human disturbance. These “urban avoiders” avoid big cities.

“Few studies have investigated the movements of ocean predators in relation to urbanization, but since other studies have shown that land predators are urban avoiders, we expected sharks to be too,” said Neil Hammerschlag, director of the UM Shark Research and Conservation Program and lead author of the study.

Continue reading at University of Miami

Image via University of Miami