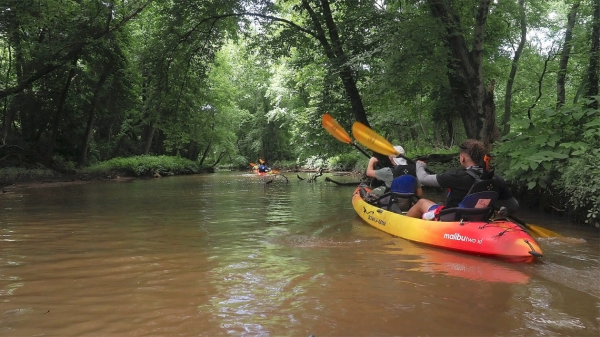 Flowing through hard-pressed Camden, New Jersey’s Cooper River was long abused and ignored by area residents. Now, following the example of other urban restoration efforts, a campaign is underway to encourage more use of the Cooper and an appreciation of its natural assets.

In southern New Jersey’s heavily urbanized Camden County, the Cooper River winds past factories, under interstate highway bridges, and over dams built long ago to drive mills or control water flow. The few people who brave paddling up the river by kayak or canoe are greeted by the noise of cars and trains and must occasionally dodge discarded tires, TVs, and other debris left by those who for years treated the river as the trash-filled sewer it once was. Opportunities to launch boats are limited to a few steep banks and muddy beaches.

Like many U.S. urban waterways, the 16-mile Cooper River was long ignored and abused, but it is now the focus of a campaign to alert the public to the existence of a recovering natural gem flowing through the heart of this South Jersey landscape. The river’s assets, as discovered by a recent expedition along the length of the river, include bald eagles, herons, foxes, beavers, fish, and various insects and plants, all showing that reports of its biological death are greatly exaggerated.

Beneath a dam about halfway up the river, scientists censused more than 100 fish from 10 species in less than half an hour by temporarily stunning them with an electric current. And in a marshy forest bordering the Cooper, a member of the team found a ragged fringed orchid, a delicate bog-dwelling plant that was an unexpected discovery near three now-remediated Superfund sites in America’s most densely populated state.