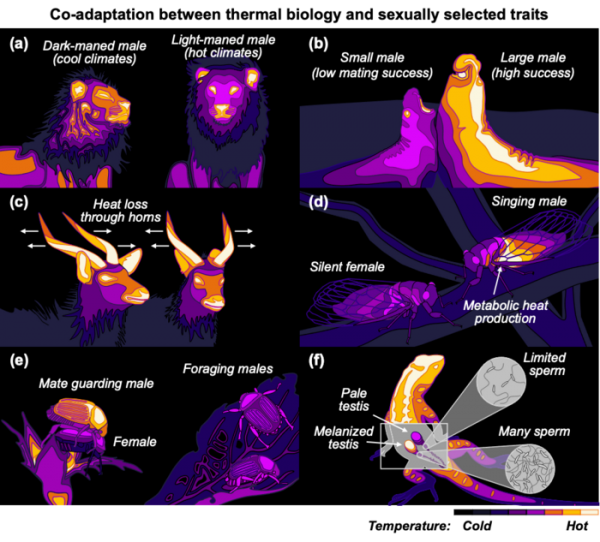 Temperature affects nearly every part of an animal’s day-to-day existence.

Temperature affects nearly every part of an animal’s day-to-day existence. Biologists have, for good reason, spent a huge amount of time trying to understand how animals can survive in the climates in which they live. They have learned a lot about the strategies that animals use to keep themselves from overheating or freezing to death.

But beyond survival, how does temperature affect the birds and the bees, and all of the other animals? Writing in the journal Ecology Letters, Michael Moore, a postdoctoral fellow with the Living Earth Collaborative at Washington University in St. Louis, and his collaborators Noah Leith and Kasey Fowler-Finn at Saint Louis University (SLU) examined the state of research into these interactions and propose new ways for how to study them.

Their new paper considers the myriad ways that thermal biology co-adapts with the traits favored by sexual selection, including things like courtship displays, ornamental coloration and enlarged weapons like horns or claws.

“Now that we’ve studied a huge number of traits that animals have evolved in order to survive the temperatures they face, we’re starting to realize that these traits also have consequences for where and how animals reproduce,” said WashU’s Moore, a biologist in Arts & Sciences, whose recent research has shown that dragonfly males have consistently evolved less breeding coloration in regions with hotter climates. “But as we thought about the ways in which an animal’s thermal traits influence how it tries to attract mates, we also couldn’t shake the feeling that this was a very survival-centric view of the adaptation.

Image: From a new paper published in Ecology Letters, this graphic shows examples of how interactions between temperature and sexual selection drive the co-adaptation of thermal physiology, thermoregulation and sexually selected traits in animals such as lions, elephant seals, antelopes, cicadas, Japanese beetles and rose-bellied lizards. (Credit: Noah Leith and Ecology Letters)