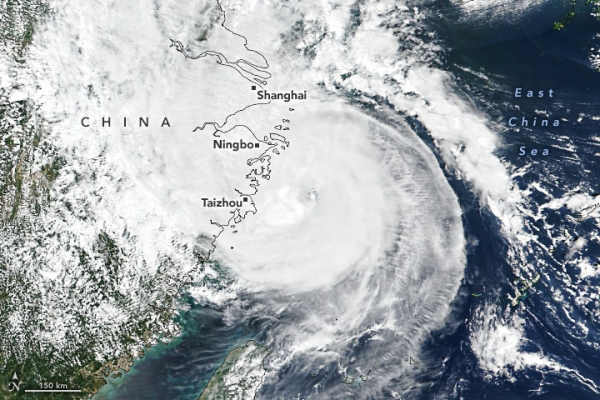 On September 14, 2022, Typhoon Muifa made landfall twice near China’s largest metropolitan area and several of the world’s major shipping ports.

On September 14, 2022, Typhoon Muifa made landfall twice near China’s largest metropolitan area and several of the world’s major shipping ports. The typhoon first crossed over land at Zhoushan Island, then passed over Hangzhou Bay, and eventually came ashore in Shanghai.

News reports called it the strongest storm to reach the Yangtze River Delta since Typhoon Damrey in 2012. An estimated 230 million people live on and around the delta. Operations were suspended in the major ports of Ningbo and Shanghai, as well as oil and gas operations on Zhoushan. Ferry and shipping traffic were suspended, fishing boats were called into port, and flights to and from the region were canceled. According to China’s Xinhua news agency, more than 1.3 million people were relocated from Zhoushan before the arrival of the storm.

Just after 1 p.m. local time on September 14, 2022, the Visible Infrared Imaging Radiometer Suite (VIIRS) on the Suomi-NPP satellite acquired this natural-color image of Muifa as it was approaching southeastern China. At 10:15 p.m. (14:15 Universal Time) on September 14, the U.S. Joint Typhoon Warning Center reported that the center of the storm had moved offshore of Zhoushan and was about 150 kilometers (90 miles) south-southeast of Shanghai. Muifa had sustained winds of 80 knots (90 miles/150 kilometers per hour), with gusts up to 100 knots at that time.