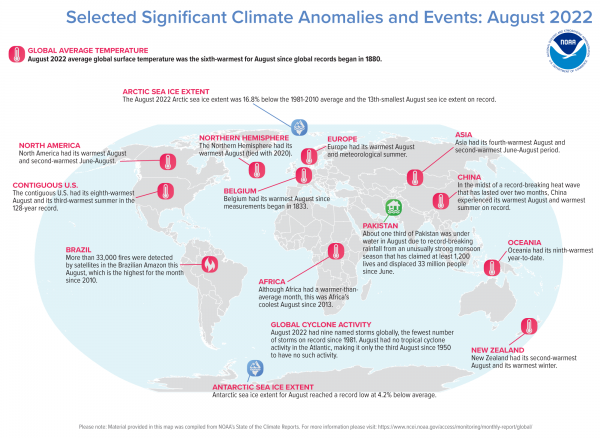 August 2022 was the world’s sixth-warmest August in 143 years, according to scientists at NOAA’s National Centers for Environmental Information.

August 2022 was the world’s sixth-warmest August in 143 years, according to scientists at NOAA’s National Centers for Environmental Information.

The warm August wrapped up the Northern Hemisphere’s second-hottest meteorological summer on record.

The average global land and ocean surface temperature in August was 1.62 degrees F (0.90 of a degree C) above the 20th-century average of 60.1 degrees F (15.6 degrees C), making it the sixth-hottest August in the 143-year global climate record.

North America and Europe both had their hottest Augusts on record as Asia recorded its fourth-hottest August. South America, Africa and the Oceania region all had warmer-than-average Augusts but none saw a top-10 warm August.

A map of the world plotted with some of the most significant climate events that occurred during August 2022. Please see the story below as well as more details in the report summary from NOAA NCEI (Photo Credit: NOAA NCEI)